I’m finding it hard to stay sane in these early stages.

During the 2 Week Wait I scoured Dr. DuckDuck Go for symptoms of pregnancy. Now that I know I’m pregnant I scour for signs of a “missed miscarriage”. It’s scary how you don’t know. I still have most of the symptoms of a pregnancy.

Everyone says, “Relax. Stay positive.” My husband too.

Normally I could, but my moods have been on a roller coaster. I wake up euphorically happy, sure everything is right with the world. By lunch I feel anger at everything. Then, by evening I fall into despair sure nothing ever works out in the world. The swings are intense, so intense that I feel like I’m a teen again going through the raging hormones of puberty.

Since I follow many infertility blogs I know very well what can go wrong. I’ve read countless stories of that first scan and the devastation the person felt when the doctor said, “I’m sorry. There’s nothing there”.

Will that be me? Will this all crumble?

I feel guilty for being this dramatic. I can keep it in around friends, but these feelings are still there, beneath the surface. The dread of my five week scan doesn’t leave me.

I looked up symptoms of five weeks pregnant and one was “emotional meltdowns”.

Photo by Kat Jayne on Pexels.com

I hate how out of control my mood is and how I can’t seem to be my usual optimistic self. If I’m honest, I’m very worried about the quality of this embryo. It’s E2 never broke 200 before it was taken out. It was the first mature egg we had managed to take out since two years ago.

Neither of us had ever had a single dream with a baby in it before. It might seem like a strange thing to know, but I think you generally know what things you usually dream of. Things in dreams that have never been there before stand out. I know I’ve dreamed of flying and riding on dragons and being psychic. I don’t remember the specific dreams, yet I remember I’ve dreamed of those things. Never have I dreamed of babies until 2018. Not even as side characters in my dreams. My dreams have been 100 % baby-free.

The first baby dream I had during Golden Week was of a vague baby that I only felt was a girl, but had nothing that gave it away. Someone else was holding the child. I never actually held it in the dream. It was there, yet out of reach. I don’t remember why. Oddly enough, my husband had a similar dream seven days later. I was shocked when he told me about his because at the time I never told him about mine. The child was also held by others or in a crib, but we never held it. It was… eerie how similar our dreams.

We could only look at the baby, but neither of us touched the child in those dreams.

Then, last night, for the first time in my life I dreamed in great detail of a daughter strapped to my chest in one of those baby-strap-chest-things. Her hand curled around my thumbs, and I was playing with her and she had bright blue eyes and strawberry-curls. This is likely impossible since my husband is Japanese and any child we had would likely inherit darker coloring.

In the dream I was riding on a train — don’t know where it was going but bright afternoon sunlight streamed in — and I played with her while I sat in the seat. I remember staring into her eyes as she stared into my, laughing and giggling. All I did was play with her like the countless mothers I’ve seen do on trains in Tokyo.

It was the realest dream I’ve had in a long time. When I woke up, I was shocked that the child was only a figment of my imagination. I was also sad. She was a lovely child. Lovely. 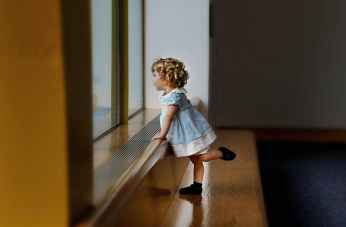 Photo by Johan Bos on Pexels.com

I hope everything works out. I hope dreams do come true.

7 thoughts on “I’m Terrified Of Next Week’s Result”

The diary of a broken body

Photography & Other - All Rights Reserved