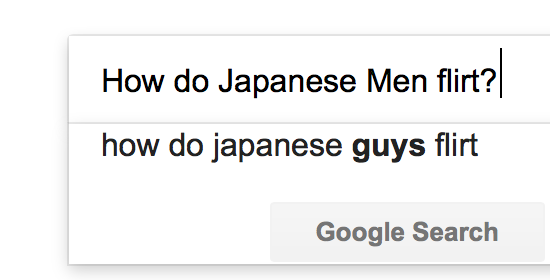 Many years ago I googled that question into the computer monitor at my university’s lab. It was late and the lab was empty like always when midterms were finished. The tap-tap-tap of my keystrokes echoed off the white-walled room.

The results confirmed what my friends and Japanese room mate, Ami, had all said: Japanese guys are shy. You have to be patient. They don’t show their feelings.

I leaned back in the swivel chair and stared at the ceiling. Is that true? I wondered.

I struggled to believe it. But that’s what everyone told me, even Google.

With a heavy sigh, I logged out and headed home for the night.

I was no closer to an answer.

For the sake of privacy, let’s call my crush Gee.

Gee was a tall, lean man who came to my university in Texas through a study abroad program. He had eyebrows with a startling similarity to Spock (Star Trek).

We met at the Japanese Culture Club. Gee sat alone in the corner making rice balls at a fold-out table. In contrast to the other Japanese guys who were stylish and looked like cut-outs from a Japanese Boy Idol Magazine, Gee was plain. He wore a plaid button-down shirt and brown slacks. In fact, his plainness made him stand out among the trendy group.

No one went near him unless necessary. I felt sorry for him. I was also curious so I approached and offered to help him make rice balls. He shrugged and said, “If you want”. At first, we sat in silence. I started to pepper him with questions that he only answered with “Yes”, “No”, or “I don’t know”. He offered little information on his own and only if pressed.

I mentioned I had never seen him here before and he answered, “They made me come here.”

“My study abroad program. I have to join these events sometimes.”

The silence returned. We finished the rice balls and went our separate ways. One of the Japanese women approached me afterwards and asked, “Were you talking to Gee? Isn’t he kind of… strange?”

Another said, “Yeah, no one understands him.”

It was in that moment Gee became a puzzle to me, one I wanted to solve.

He was stone-faced, said little unless asked, and hardly showed emotion. In my head I decided he was onion with layers and layers hiding a tender-hearted man. I wanted to crack the Code of Gee.

That was how it started. I wanted to figure him out. I messaged him, molded my schedule to fit his, and hung out whenever he was available for the next six months. Slowly, feelings built inside and I yearned to know if he felt any attraction to me. All I got were mixed signals that could be interpreted as platonic or hints of more. My imagination showed me what I wanted to see.

Rumors spread about us among the other Japanese students. More than once the two of us were spotted together. When asked, I said, “Just friends.”

But I wanted more. I began to ask, “How do you know if a Japanese guy is flirting with you?”

I couldn’t read Gee. I couldn’t figure out if he wanted more. People told me it was just the culture. He was a traditional man raised in the countryside and wouldn’t show affection like men in other countries do.

I hardly knew anything about Japanese back then, so I thought, “That must be true. Maybe they’re right. Maybe I can understand Gee if I learn more about his culture.”

Photo by Pixabay on Pexels.com

As his only female friend in Texas, I felt special.

One day, Gee messaged me and asked if I was free on Saturday. “This is it!” I thought. He was finally showing that he liked me. That the attraction was mutual. We met in the university parking lot and he let me ride on the back of his bike as he pedaled to his apartment where he cooked me gyudon (beef bowl).

I was happy as he sat down and very seriously asked, “You said you had an uncle in Virginia.”

“Do you want to travel to the North East together? Can we stay a couple nights at your uncle’s place?” He then unfolded a map of the US and talked about his friend in D.C. He wanted to know if I’d join him.

I agreed, and we began planning.

It was a fun trip. We went to New York City, Washington D.C., Niagra Falls, and stayed at my uncles. A blizzard in Albany, New York forced us to take shelter in a hotel room. We had separate beds. If there was ever any time for Gee to make a move, now was the time.

He never did. We briefly chatted about getting the bus to the airport tomorrow, and that was it.

The next day I sat on the bus, staring out the window while Gee was immersed in a book on Physics. If I wasn’t constantly initiating conversation we would hardly speak at all. A feeling of exhaustion settled in me. I was tried of trying to figure him out. I was tired of Gee.

Flirting wasn’t fun with him. I wondered if all Japanese guys were this miserable to flirt with. Were they really this clueless or was it just Gee?

In that moment I decided to let go. Enough was enough. If Gee wanted to be even just friends, he’d need to try as well. I couldn’t do all the work anymore.

And after a lot of sadness, I resolved to let go.

Photo by Pixabay on Pexels.com

The following semester I stopped contacting him. I would have replied if he contacted me, but, other than a “Tell your Uncle thanks for letting us stay at his home” he never did.

Out of sight, out of heart.

Months went by. A year later I was accepted into the JET program. I received one email from Gee before I left wishing me well, saying, “We should meet”. I replied, “I’d like that. Let me know when you’re free”. No response.

Two years later, situated in Japan and dating Mr. W, I received an email from Gee to my old university email account. I actually hardly checked it anymore and found it two weeks after it was sent.

I don’t quite remember how it went it, but it was like this:

This is Gee. How are you?

Do you enjoy Japan? I graduate this semester and I will go back to Japan to find a job. My parents want to meet you. I told them about you. Let me know when you are available. They said you can stay at their home for a weekend. We live in #### prefecture.

I look forward to hearing from you,

The first time I read it I was in shock. After re-reading, I slowly digested it and wondered if this was a weird joke. We had not spoken in over two years and he invited me to stay at his parents. Even stranger, he told them about me? A woman he’d not communicated with in two years.

Photo by rawpixel.com on Pexels.com

What did it mean? Once more I went to Google.

I was weirded out.

To this day I don’t know if Gee only meant it as repayment for my Uncle letting us stay over, but I know I was not interested. I had severed all ties. In a polite, restrained message, I declined his offer. I thanked him and said I would be too busy.

He never replied. I never heard from him again.

After dating Mr. Waka, I no longer believe Japanese guy have some unique way of flirting. Mr. Waka wasn’t like that. It was easy and clear to understand his intentions. There were no games, no mixed signals. It was relaxed, easy, and fun.

I never had to resort to Google to figure out Mr. Waka.

I feel like it was a mistake giving Gee a pass because of the stereotype that “Japanese men are shy”. I feel it blinded me to the many problems of his behavior both in potential relationship and friendship.

If you like someone and you really want them, you will make your intentions known, regardless of culture or upbringing. Flirting is flirting anywhere you go. Some cultures are just more afraid of rejection than others.

What do you think? Is flirting a universal language?

7 thoughts on “How Do Japanese Guys Flirt?”