Do not go to Tokyo if you hate crowds and people.

I got crushed in rush hour.

Rides to Tokyo can be exhausting tests of endurance. It’s not just the standing in one place for an hour, it’s the masses of commuters, their smells and noises. It’s everything.

I try to avoid rush hour if I can, or crush rush.

Ever want to know what a sardine feels like? 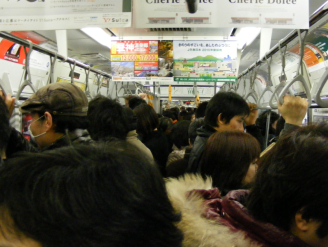 I got caught in rush on one of the most packed train lines in Tokyo. The staff came out and pushed people onto the train until the doors shut — it was that packed! I could’ve passed out and never hit the floor because of how dense it was inside. I couldn’t move. Not even an inch.

Did I mention I’m slightly claustrophobic?  Yeah, so not being able to move causes anxiety and panic. I had to focus hard on staying calm. I counted down the stops, praying it would be over soon. Every stop was a jostling of people squeezing out like worms wiggling out of the dirt. There would be apologies and angry words. Just as you had enough space to breathe, new people pushed on.

I shared eye contact with another foreigner who spent half an our rammed against the door windows.

It only got worse when a mother with very young infant entered into this disaster. The baby was strapped to her chest and pushed against by all the other passengers who could not help it. The mob forced them against the infant who started to bawl as all these strangers pressed against it. The mother got thrown more than a few looks of “Really?  At rush hour?!”

I was right next to her and could not hear easily out of my right ear after twenty minutes of that screeching. If I ever succeed in having a baby, there is no way I am putting them through that hell unless it’s one heck of an emergency. The baby was unhappy like all of us, but vocalized that displeasure and made our hell into a living nightmare.

I don’t know want discourage a mother from getting out there and exploring the world, but… RUSH HOUR?!

Everyone looked so happy and relieved when the mother got off. I think they were all attempted to hi-five and be like “Yay! It’s over!”

I’ve heard the trains in Beijing are worse. My friends have shown me footage. I can’t understand how anyone could bear worse than that. My own blessing was my height that let me have access to the good air.

If you ride the Tokyo trains at rush hour, heaven help you!